Donald Trump’s German roots: Inside the town that spawned a dynasty

Kallstadt is the ancestral home of the billionaire businessman — and U.S. Presidential hopeful.

“My grandfather Friedrich Trump came to the United States in 1885,” Trump says in the upcoming documentary, The Kings of Kallstadt. “He joined the great gold rush, he did fantastically well, he loved this country. 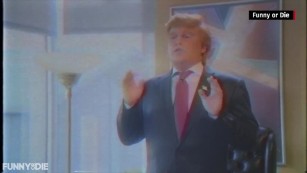 “But you know what? I love Kallstadt also. They grow ’em well in Kallstadt … Very well. Believe me, it’s good stock.”

Read: Who is Donald Trump?

That’s Trump’s take on it, at least. But other accounts suggest that Grandfather Trump didn’t leave Kallstadt on the best of terms.

He moved away as a teenager, just before reaching the age of mandatory military service, and went to make his fortune in the Alaska gold rush.

According to the book “The Trumps: Three Generations That Built an Empire,” Friedrich Trump went on to establish several saloons and hotels that doubled as brothels.

He advertised his Arctic Hotel with this enticement: “For single men the Arctic has excellent accommodations as well as the best restaurant in Bennett, but I would not advise respectable women to go there to sleep as they are liable to hear that which would be repugnant to their feelings — and uttered, too, by the depraved of their own sex.” 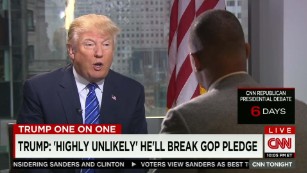 So tainted was Friedrich Trump’s reputation that when he returned to Kallstadt several years later to settle down and marry the girl next door, Eva Christ, his request for residency was flatly rejected.

Grandfather Trump was forced to return to the United States, where he went on to build the Trump dynasty.

There are few traces of Friedrich Trump left in Kallstadt, though the house where he lived as a boy still stands, and the tombstone marking the grave of his father remains in the local graveyard.

Read: What is Donald Trump saying?

But Mayor Thomas Jaworek says the “Trump effect” has brought Kallstadt plenty of attention — “Maybe too much attention!”

On a tour of Kallstadt’s rolling vineyards and narrow cobble-stone streets, we are speculating on how many Trump relatives still live in Kallstadt, when a car rolls up and a man with grey hair leans out.

“That would be a relative of Trump,” the mayor says, “One of many.” 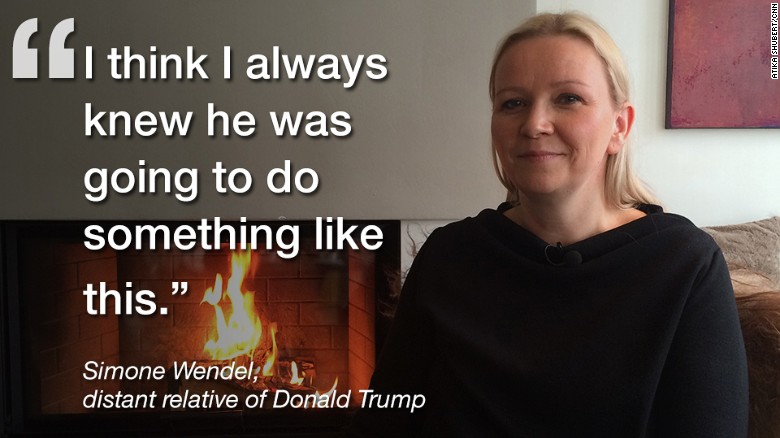 Simone Wendel is also a distant Trump relative — by marriage at least: Her mother’s cousin was married to the grandson of Donald Trump’s great uncle.

Wendel was so intrigued by Trump’s Kallstadt connection that she spent five years making a documentary about it.

“The Donald” features in the film, though he didn’t come to Kallstadt for it.

Simone recalls that even though he hadn’t yet announced his candidacy when she interviewed him, “I wasn’t surprised he decide to run for president,” adding, “I think I always knew he was going to do something like this.”

So what do Kallstadt’s residents think of the possibility of a President Trump? Most of the townspeople we spoke to didn’t want to comment on U.S. politics. 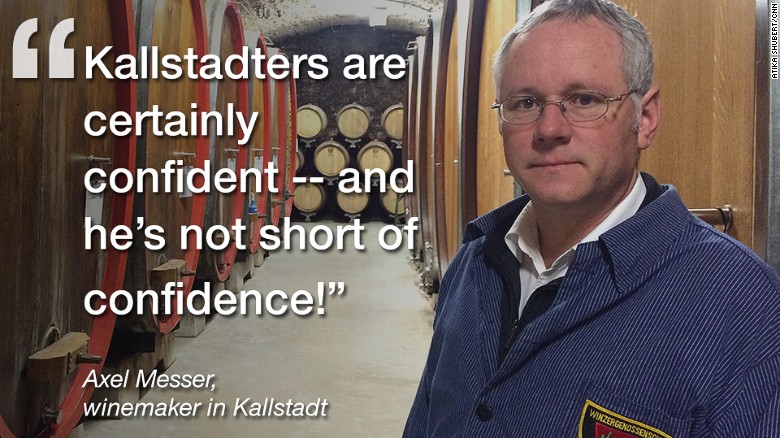 Messer’s family is more Heinz than Trump; it has been making wine in Kallstadt since before the town started keeping records in the 1600s.

Walking us through his centuries-old wine cellar, Messer says there is one quality Trump definitely inherited from his ancestral home: “Kallstadters are certainly confident,” Messer says. “And he’s not short of confidence!” 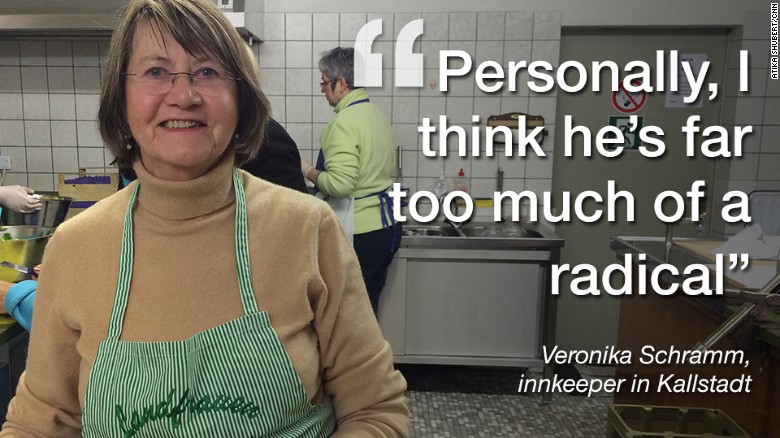 Veronika Schramm, local innkeeper and one of the leading members of Kallstadt’s Country Ladies Association, doesn’t think the businessman would like Kallstadt all that much nowadays.

“Personally I think he’s far too much of a radical,” she told us as she chopped green onions for herring salad. “We are a friendly place! We like all kinds of people, and we welcome everyone.”

Trump has been less kind to Germany’s Chancellor Angela Merkel. When Merkel was announced as TIME’s 2015 Person of the Year in recognition of her decision to welcome hundreds of thousands of refugees to the country, he referred to her as the “person who is ruining Germany.” 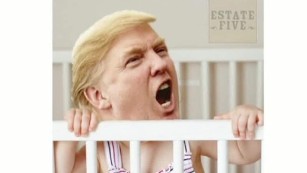 “They’re going to have riots in Germany,” he told CBS at the time. “I always thought Merkel was, like, this great leader. What she’s done in Germany is insane. It’s insane letting in that many people.”

Kings of Kallstadt is set for release in the United States this summer. Filmmaker Wendell says the town has already drawn more visitors since the film came out in Germany.

But, she says, even Trump’s big personality will not change Kallstadt.

“It’s that kind of place,” she says. “People enjoy what matters: Food, wine and family. Something I really hope never changes.

Women In Government Announces 2021-2022 Board of Directors