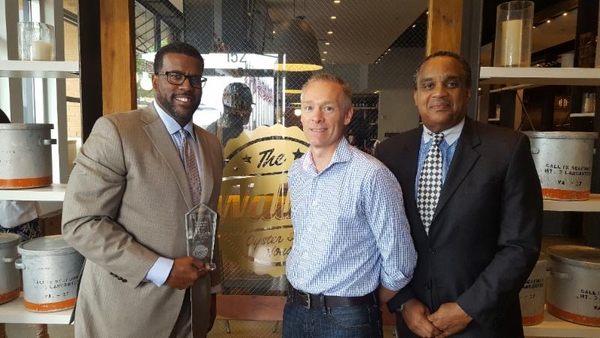 LANDOVER, MD, July 14, 2017 /24-7PressRelease/ — Since 2003, E. Davon Kelly, a native of Forestville, MD has operated a business in Prince George’s County that includes a management consulting firm (NOVAD), two upscale barbershops (My Barber’s Lounge), a beauty and barber salon (Salon DK) and a nonprofit organization, The 13th Man. To recognize his mentoring, leadership, dedication charitable work in the community, Davon Kelly was selected as the 4th Community Leadership Award Recipient by Walrus Oyster & Ale House, in partnership with the Prince George’s Chamber of Commerce.

Davon Kelly expressed his appreciation for the award that acknowledges his desire to help shape the next generation of Prince George’s County leaders through his legacy organization, the 13th Man that provides empowerment and leadership development engagements, “For many young men, athletics is a forum that embraces their energy, raw talent and innate need to belong to and excel at something where they can succeed. But, the 13th man who didn’t make the roster of 12 is, far too often, left on the sidelines to see his peers move toward success. These are the young men that The 13th Man seeks to nurture, encourage greatness, and develop their potential for victory on the playing field called life.” Kelly, a former high school and college basketball star, understands the value of team sports and translated his lessons learned into a book that is an ongoing fundraising vehicle for the organization, From Courtside to the Boardroom.

More than 75 young men have signed up to participate in this year’s 13th Man Summer Classic, a 4-day empowerment and leadership development retreat held at the Greenbelt Marriott from July 26 until July 29. In addition to sports and other fun activities, the event includes educational and inspirational speakers, and is bolstered by 10 male mentors that partner with the youth. During the academic school year, the 13th Man provides weekly tutoring services. Following the success of the Prince George’s County-based organization, Kelly expanded the 13th Man to open a chapter in Charlotte, North Carolina this past April. The 13th Man will hold its annual Charity Golf Tournament at Woodmore Country Club, September 25. For more information about how you can support these life-enhancing mentoring and enrichment programs, please visit the website, or contact the 13th Man office at (301) 429-8807.

The award-winning My Barber’s Lounge was opened in Greenbelt in 2012 and Forestville in 2013. The Barbershops were the recipient of the 2013 Best of Gazette newspaper’s award, Steve Harvey’s Neighborhood Award for Best Barbershop in 2014 and the 2016 Greenbelt Small Business Excellence Award. Salon DK was opened this year in Bowie, MD.